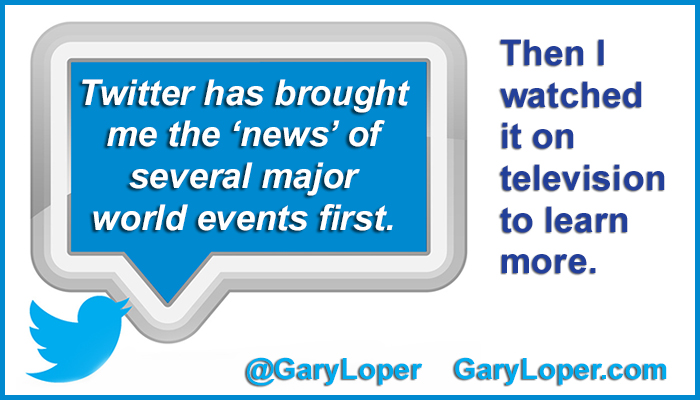 In the beginning Twitter was designed as a way for small groups of people to stay in touch via SMS (short message service or text). Twitter has now grown into one of the Top 10 most visited websites, and is often described as the SMS of the Internet.

In spite of popular belief of non-Tweeters, all those tweets are not about what we had for lunch. Although, even the lunch tweets have a place. In an interview with Twitter founder Jack Dorsey, his mother relishes tweets from her children — ‘good morning, good night and what I ate’ tweets, all give her peace of mind that her children, spread across the country, are alive and thriving each day.

In the early days of Twitter’s online presence, world events were shared via tweets – even before the ‘traditional media’ would pick up on the story. Jack Dorsey shared that he received a tweet about the 2008 San Francisco earthquake before the tremors were felt in his Bay Area neighborhood.

Since then Twitter has become a force in the way the world communicates, sharing images, emotions and results of everything they are experiencing in their lives. We have seen floods, earthquakes, political protests, and so much more all shared on Twitter in a raw unfiltered way that really showed the rest of the world – what others were experiencing – both good and bad, across the globe. Twitter has brought me the ‘news’ of several major world events first, then I watched it on television to learn more. Truly Twitter is changing the way the world communicates and brings new awareness to the plights of some of the people we share the Earth with.

The founders of Twitter had a vision that Twitter would become a virtual town square, an uncensored place for Twitizens to gather and share their stories, their songs, their products, and their wisdom allowing others to find the messages that would be meaningful for them to improve their lives and businesses.

The proof of the global impact of Twitter is very obvious, even to a causal ‘Twitizen’ as well as the non-Tweeters amongst us. We can go anywhere, flip the channel, read an email, or watch a video without someone asking us to ‘Follow’ them on Twitter or ‘Like’ them on Facebook. Other social networking platforms have not cracked the acceptance that Twitter and Facebook have gained across all other marketing vehicles.

The numbers of daily new accounts on each site is the only proof most people should need to see, that social networking is the way of the future to reach new audiences for our products, to create a community of loyal supports and raving fans. It is the quickest and most financially sound way to stay in touch with our customers, prospects and supporters.

But there is so much more that can be achieved with social networking, especially Twitter, than for ways to help change lives with products or services alone.

One of the reasons why social networking sites are so popular is that humans have a primary need for validation. With the change in some of the ways we live today, the connection to other people is limited, if not almost vacant from many lives. Working longer hours, running the kids to practices and events, other family, friend and spiritual obligations, they have greatly reduced the available time for many people to expand on their interests and passions without having to sacrifice something else. With Twitter on our desktops or phones, we can check on those other important things in our lives while we are attending to all the necessary stuff that controls the day.

One of the reasons I feel that you should become even more passionate about Twitter is . . . going back to the town square picture . . . everything is searchable and accessible to everyone – which is not the case on Facebook. Facebook has limited the access to your Friends even more. Facebook’s current system limits the number of your ‘Friends’ or ‘Likes’ who will see your post. Additional exposure to your own list of ‘Friends’ and ‘Likes’ only can be gained with more ‘Likes’, ‘Comments’ and ‘Shares’. That is the reason why some social media experts are teaching the ‘Like’ Bomb method on Facebook, as way to get around the system. The article mentions that is the focus of Facebook’s new system of a 2% to 5% access to your lists, almost forcing any successful marketing on Facebook to happen through paid advertising.

Twitter has no limits of who can see your tweets. Anyone worldwide can search any subject or phrase, and can find your tweets. Twitter messages are also found through internet searches, the only other social networking sites that individual messages are found in this way is You Tube.

With the unlimited access we have with Twitter to share our message or business with the world, we can truly have a global impact from the office, in our spare rooms, or dining room tables.

Do you have a message to share? Do you need help on how to utilize Twitter’s platform to spread your personal and/or your business message across the Twitterverse, while Building Better Relationships? Schedule some time with me to discuss what your mission is on Twitter.