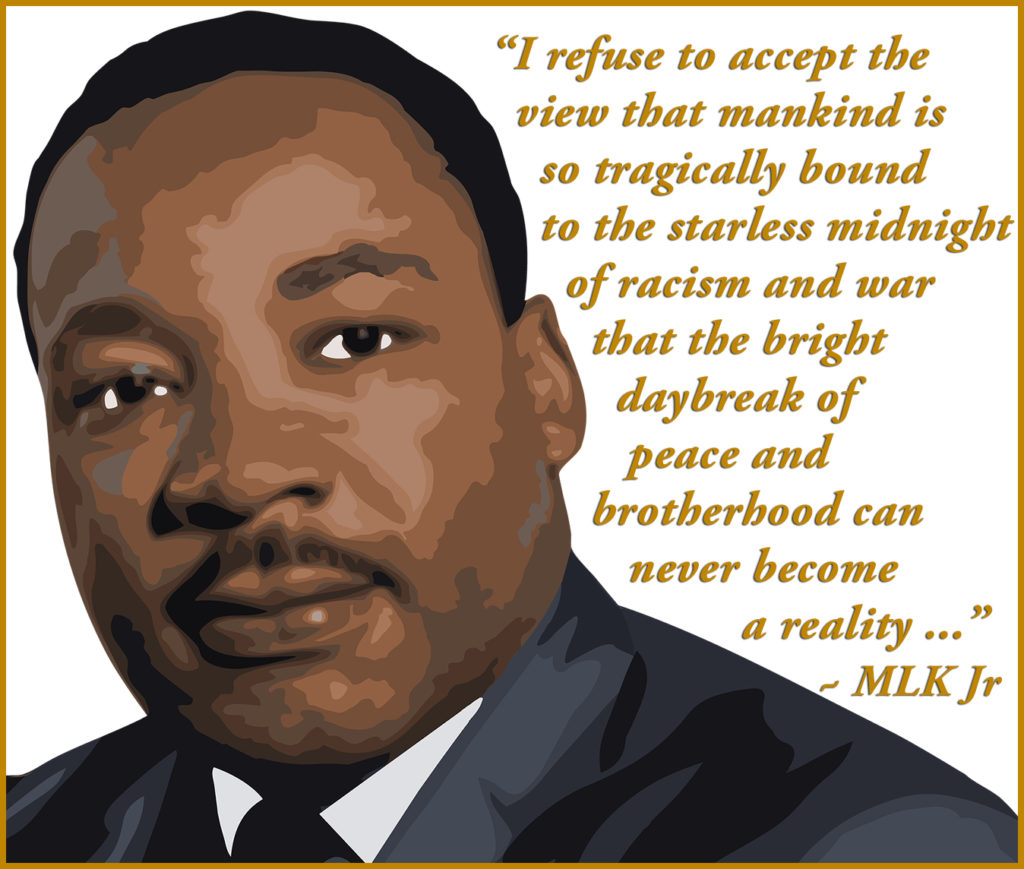 Every year, precisely the third Monday in the month of January we celebrate
Martin Luther King Jr.’s birthday to honor his birth on January 15, 1929.

This year his day of recognition and tribute will be honored on Monday,
January 20th.

Often we hear qualifying attributes of why we give witness to a distinguished leader as one of greatest. For the record, Martin Luther King, Jr. surpassed many by his virtue and integrity, a man of outstanding character. He was an influential leader of high regard. It was never about only affirming the rights of African-American citizens. It truly was about equal rights for everyone.

In my book, he personified a man of honor, respect, excellence and achievement. Like Mahatma Gandhi, he firmly believed in using the power of love instead of the abusive force of hatred. Much the same as Gandhi, he believed in settling disagreements by peaceful measures.

“If humanity is to progress, Gandhi is inescapable. He lived, thought, acted and inspired by the vision of humanity evolving toward a world
of peace and harmony.” ~ Dr. Martin Luther King, Jr.

In 1963, he led a historical march on Washington. His memorable speech, invigorated with passion, gusto, and strength, spoke of his grand dream.
As he so energetically stated …

It is hard to envision that it was only in the 1960’s that our nation changed the laws that prohibited the horrendous display of “White Only” signs. Those signs, a form of control, were an ugly reminder of a time of discrimination and humiliation.

This year on January 20th, it is a day of recognition of his fight for freedom, equity, and dignity for everyone and the power in his message to create change through nonviolence.

“History will have to record that the greatest tragedy of this period of social transition was not the strident clamor of the bad people, but the appalling silence of the good people.” ~ Dr. Martin Luther King, Jr.

Silence can be as impeding and inhibiting of positive changes, and as cancerous as detrimental behaviors of discrimination.

“I refuse to accept the view that mankind is so tragically bound to the starless midnight of racism and war that the bright daybreak of peace and brotherhood can never become a reality… I believe that unarmed truth and unconditional love will have the final word.” ~ Dr. Martin Luther King, Jr.

Paving the way to freedom, a world of peace, a place that we all can co-exist together through mutual respect, appreciation and value only can be achieved through love, faith, honor, honoring each other’s differences and celebrating our diversities,
for the betterment of mankind.